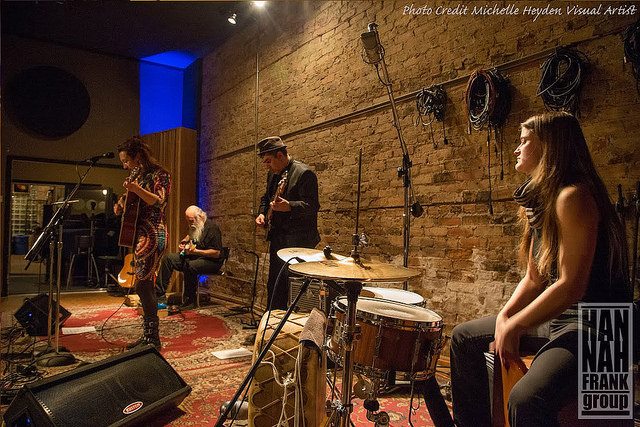 Hear the music and purchase it on Bandcamp. Buy it here.

Scroll down for more music and info.

Hannah Frank Group features Hannah Frank (guitar/vocals) and a combination of: Meg Thomas presiding over percussion, Victor Sanders on the jaw-dropping talking tone guitar, Ben E. Miller on bass. Hannah Frank Group has performed at Chicago venues ranging from House of Blues and Mayne Stage to listening rooms like Uncommon Ground and festivals including Glenwood Avenue Arts Fest and Bucktown Garden Walk. In the 2000-teens, many shows Hannah Frank Group were a part of were presented by Chicago Acoustic Underground, including the popular “Singing for Your Supper” songwriter showcase as well as songwriter showcases at venues, conferences and recording studios. Various formats of the group have also presented “Tangled Up in Blues” a show including songs by Dylan as well as traditional blues material. The group has been featured on WLUW, WDCB and Chicago Music Guide; and in the Chicago Independent Songwriter Festival.

The new 7-inch 45 rpm “Comes Love” is available through Random Chance Records. This label was started by Rick Congress, author of a book on James “Yank” Rachell (Blues Mandolin Man, University Press of Mississippi, 2001). The roster of this label includes an array of amazing artists, learn more here.